Posted by Mansour AbdulBaki, PhD, with research by Rachel Leung and Sofia Rizzo

Aerosol Generating Procedures (AGPs), such as those with ultrasonic scalers and air-water syringes, are the norm in dental clinics and pose a risk to both staff and patients. The recent COVID-19 pandemic has heightened these risks.

Here is what you need to know to better understand the risks and the steps your practice can take to minimize exposure and create a clean-air environment for staff and patients. 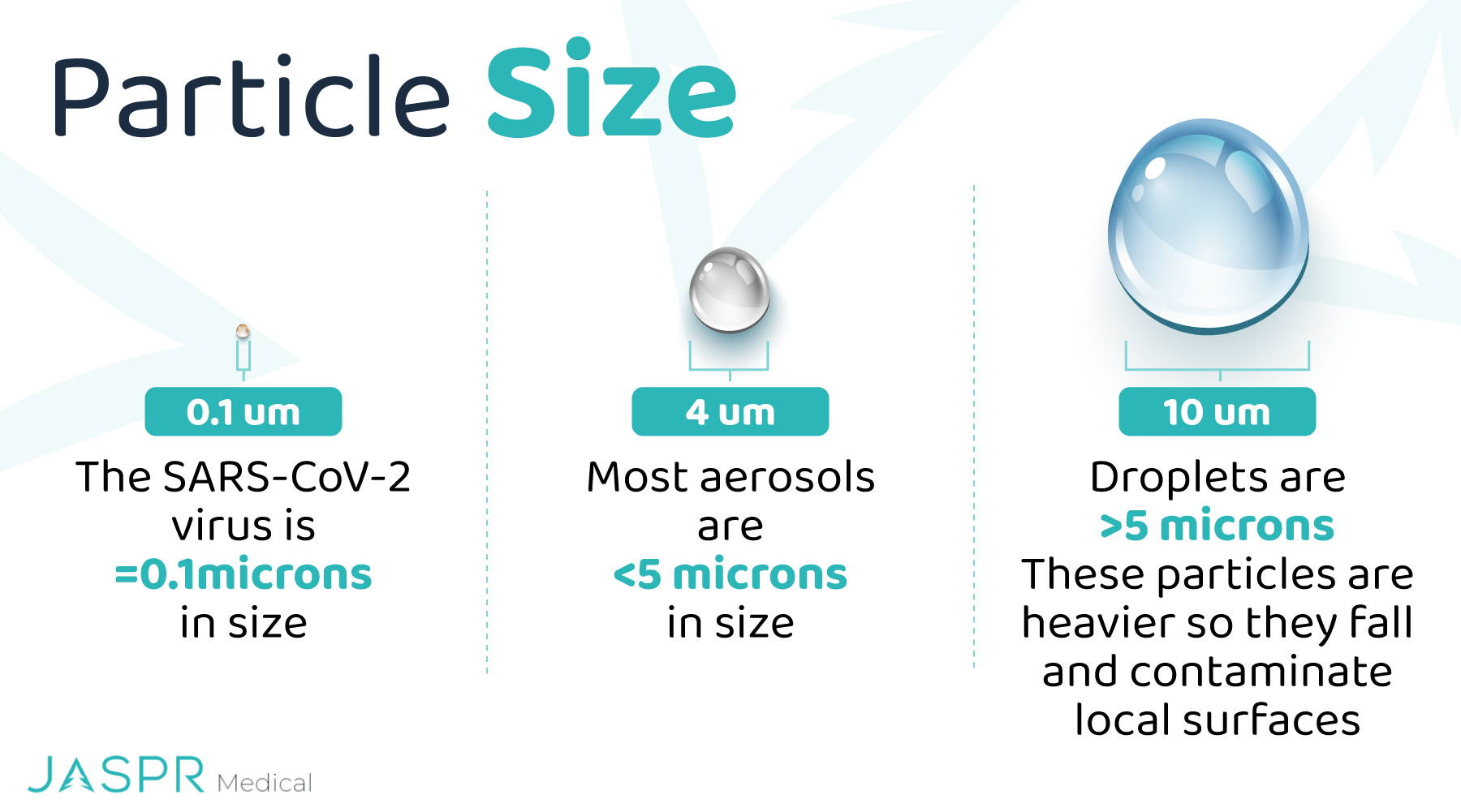 Droplets are categorized as particles greater than 5 microns in diameter, and have the tendency to fall due to gravity and land on local surfaces. They fall faster than they evaporate, unlike aerosols. However, cross flows of air from ventilation, air conditioning, or the opening and closing of doors can elongate the time in which droplets stay suspended in the air.

Even without such flows, droplets can reach over 2 meters away from the source and land on surfaces like chairs, tools, counters and clothing. After the initial contamination, the viral particles remain viable on plastic or steel surfaces for up to 72 hours.

Aerosols, also known as droplet nuclei, are small particles of fluid, usually smaller than 5 microns in diameter, that sometimes can reach up to 20 microns. They are classified as aerosols due to their ability to linger in the air for an extended period of time. Dental tools such as ultrasonic scalers, 3 way air-water syringes, and hand instruments can create aerosols and spatter that contain particle droplets of water, saliva, blood, microorganisms, and other debris.

According to the CDC, droplet nuclei containing SARS-CoV-2 can contaminate surfaces in a radius of 2 meters while other research highlights that aerosols, vs. droplets, can travel even further - as far as 8 meters with viral materials remaining viable in the air for up to 3 hours after generation.

With the increased amounts of aerosols and droplets due to AGPs, a dental office is one of the most at-risk locations when it comes to the transmission of airborne viruses. Both the patient and the staff working in the practice will experience a heightened amount of contaminated air trapped indoors, potentially leading to inhalation of pathogens including viral particles.

A study in the American Industrial Hygiene Association Journal on Characteristics of blood-containing aerosols generated by common powered dental instruments found that ultrasonic instrumentation can transmit 100,000 microbes per cubic foot with aerosolization of up to six feet. Further, with improper air flow patterns in a given space, microbes can last anywhere from 35 minutes to 17 hours.

Inhaled particles smaller than 2.5 microns can enter the alveoli, penetrating deeper into the lungs. Once inside the lungs, the viral particles can enter the bloodstream to target vital organs like the heart and the brain. 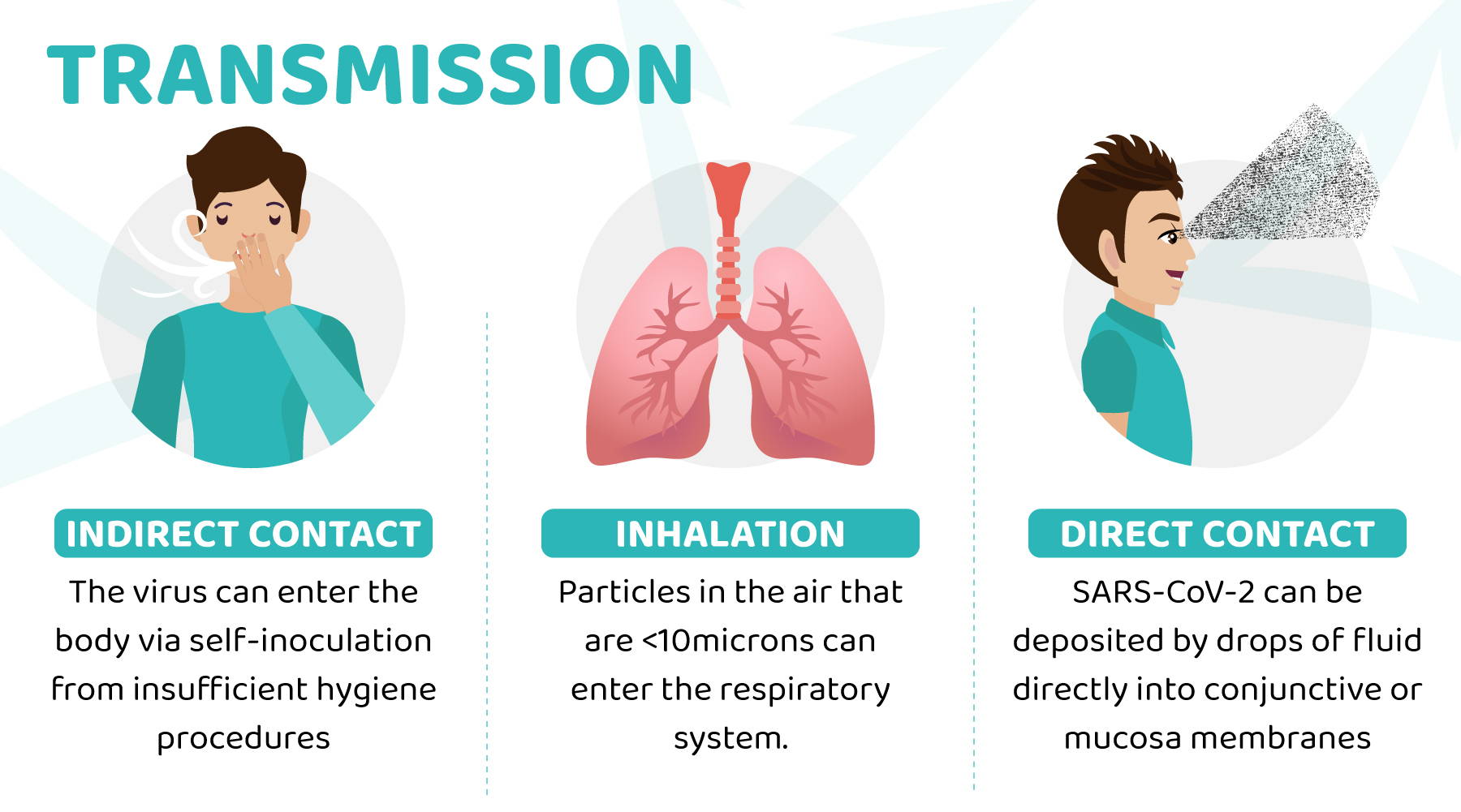 Additionally, direct contact of a contaminated fluid stream to conjunctiva or mucosa membranes can transmit the virus directly from the patient to the host. Indirect contact from insufficient cleaning protocols can lead to self-inoculation after touching contaminated surfaces such as clothes, personal protective equipment and tools.

Removal of airborne contaminants and purifying the air from the volatile organic vapors of the cleaning solutions used on surfaces requires separate procedures.

How to Combat Contaminated Air

Dealing with contaminated air relies on five strategies. These are:

The first line of defense is prevention. In the dental environment, this means reduction of contaminant generation at the source. Strategies for this include anti-microbial pre-rinses for patients, use of a dental dam or Kofferdam, 4-handed treatment and the use of high volume evacuators.

Incorporating a 60 second pre-treatment oral rinse with 1%-1.5% hydrogen peroxide or 1% povidone-iodine can significantly reduce the level of oral microorganisms within the mouth.

For imaging, use of extra-oral rather than intra-oral diagnostics can reduce the chance of a patient coughing. The use of rubber dams is encouraged for their ability to separate the teeth and the saliva within the mouth.

If aerosols and droplets can not be prevented from being generated due to the procedures needed, using a high volume evacuator can help remove up to 90% of bioaerosols.

It is preferred for air not to be moving from the source, a patient’s face, toward the breathing zone of the provider. Where feasible, consider placing the patient’s head near the return air vents, away from pedestrian corridors or a doorway where other staff or patients may pass without realizing the need for PPE, and toward the rear wall when using vestibule-type office layouts.

A minimum amount of time should be provided after the end of patient procedures to allow for aerosols to settle before staff proceeds with the cleaning and sterilization of surfaces and tools.

As seen from the table below from the CDC, removal of airborne contaminants requires time - allowing droplets and aerosols to settle. The time required depends on the size of the room, procedures performed, and the air changes per hour (ACH) provided by the ventilation in the room. The greater the number of air changes, the lower the fallow time required to experience a sufficient decrease in airborne pathogens and contaminants. 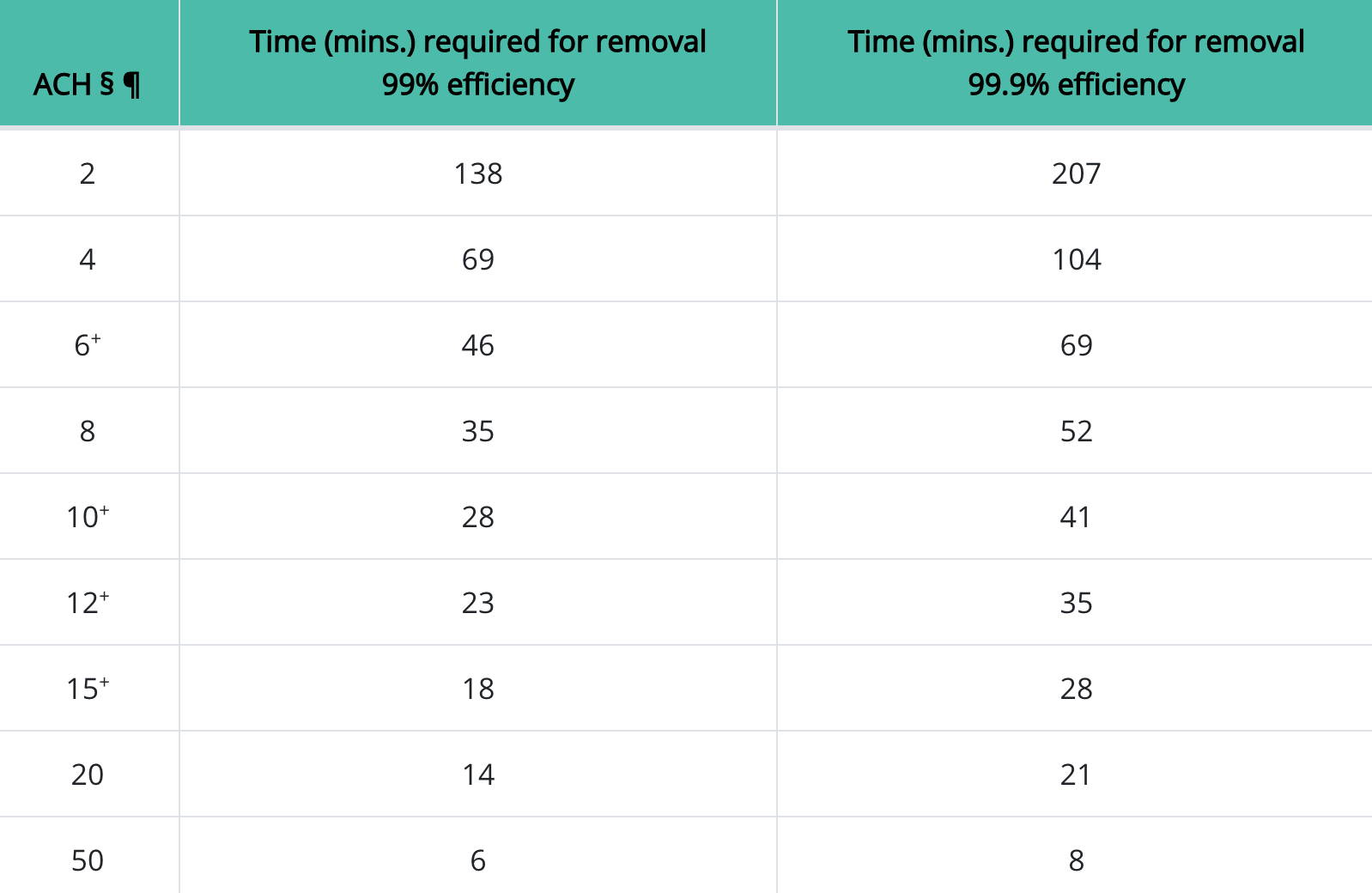 Rather than solely relying on the building’s HVAC system to dilute the air, use of a HEPA air filtration unit to reduce aerosol concentrations in the room decreases the fallow time and increases confidence in the quality of the air in your practice.

The CDC recommends using an air purifier as an additive measure for reducing fallow time and more effectively protecting staff and patients. When used properly, a HEPA filtration unit will reduce the amount of contaminated aerosol/droplet particles in the air and lower the risk for those who are in the vicinity of the aerosols. A HEPA filtration unit may also reduce the amount of particles deposited to surfaces as well.

See this resource to learn more about how HEPA filters work and how they perform against COVID-19.

The last line of defense in occupational safety is personal protective equipment suited to the job at hand. N95 respirators are highly recommended for dental health professionals to wear during aerosol generating procedures because they are most effective in protecting from aerosols.

Wearing isolation gowns and gloves during aerosol generating procedures is crucial to prevent self-inoculation via touching surfaces and contaminated clothing. In open layout offices, floor-to-ceiling enclosures also keep aerosols isolated from the rest of the dental office and make both surface and air cleaning easier and faster.


If you are interested in learning more about Jaspr air purifiers to decrease fallow time and reduce risk of contracting COVID-19, click here.